The action “Remember! We know! We will win! ” took place in Kazakhstan 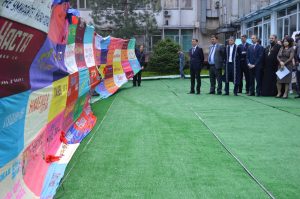 On May 18, the republican action “Remember! We know! We will win! ”Dedicated to the International Day of Remembrance of People Who Died of AIDS.

“The goal of our action,” says Nurali Amanzholov, President of the Central Asian Association of People Living with HIV and the Kazakhstan Union of People Living with HIV, is to honor the memory of those who were carried away by the epidemic and urge the public to be tolerant towards people living with HIV (PLHIV ).
The action began in Almaty. Representatives of state, international, religious and nongovernmental public organizations, doctors, students, media people gathered to honor the memory of people who died of AIDS, to express their solidarity with those affected by the HIV epidemic. The organizers of the action “Remember! We know! We will win! “: Republican Center for the Prevention and Control of AIDS, Department of Health of Almaty, ALE” Kazakhstan Union of People Living with HIV “, UNAIDS, AIDS Center in Almaty, Kazakh National Medical University named after S. D. Asfendiyarov, PSI.
– To preserve the health of PLHIV, the state today provides antiretroviral therapy free of charge, treatment regimens are constantly being improved, new antiretroviral drugs are purchased. From year to year, the trend of decreasing mortality from AIDS is strengthening, – said Bauyrzhan Bayserkin, General Director of the Republican Center for the Prevention and Control of AIDS.
Since the beginning of the HIV epidemic in Kazakhstan, more than nine thousand people have died from AIDS. But if in the early years of the epidemic, when PLHIV did not have a choice of medicines, and doctors were confused, about 280 people per year died, now, as a result of the adoption of drastic measures, the pace has noticeably slowed down.
Children with HIV receive only original drugs. To eliminate mother-to-child transmission of HIV, all pregnant women have the opportunity to be tested twice for HIV. And testing in the country is free, voluntary, confidential, and anonymous if desired. The number of Kazakhstani people being tested for HIV infection is growing every year. The epidemic can be kept at a concentrated stage.
During the action, everyone could undergo express testing for HIV infection, take part in a quiz, and ask questions of people living with HIV. PLHIV told their stories with an open face, frankly and sincerely. Students of the Kazakh National Medical University demonstrated a flash mob. The introduction of a quilt made the action especially emotional. A minute of silence was announced. Everyone thought about their life, and not only about their health, but also the health of loved ones.
Further, the action was picked up in all regions of the country in order to draw attention to the problem of all Kazakhstanis. Regional AIDS centers, public non-governmental organizations, people living with HIV, civic activists organized actions, round tables, trainings, seminars, flash mobs, lectures, film screenings and other events under the slogan of the republican action “Remember! We know! We will win! ” Thousands of Kazakhstanis took part in them.
As you know, every year the International Day of Remembrance of People Who Died of AIDS is celebrated on the third Sunday in May. For the first time, this day WorldRemembranceDayofAIDSVictims) was celebrated in the American San Francisco in 1983. A few years later, symbols of movement against this disease appeared. They were a red ribbon attached to clothes, as well as multi-colored canvases – quilts, sewn from scraps of fabric in memory of many people who passed away. And now, on the International Day of Remembrance of People Who Died of AIDS, the activists of this action and simply not indifferent people attach red ribbons to their clothes.