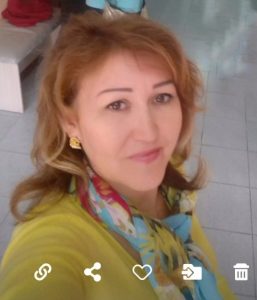 Today, 44-year-old Venera Abdurakhmanova is a happy wife and mother of three children, as well as a well-known civic activist for the rights of people living with HIV and tuberculosis, the head of the non-governmental organization Umit Zholy (Road of Hope). And yesterday she could not even dream about it, and was sure that her life was over.

– In 2007, I accidentally found out that I have HIV – infection. Husband transmitted the virus. I could not even think that this is possible. He comes from a decent family, we have a good home and wealth. But the happiness was superficial. It turned out that he used drugs, and he was good at hiding it. After another drunken brawl, he went to the hospital and was diagnosed with HIV. The atmosphere in our house has become terrible. I had to go to my relatives in Almaty.
For a long time I did not believe that I had HIV. Then the doctors told me: “You will live for three years.” And I just began to wait for death. A year later she was admitted to the hospital with tuberculosis. I was feeling very bad. She started treatment, but refused antiretroviral therapy. After all, you need to constantly go to medical institutions, disclose your status. And wherever they found out about him, they closed the door.
But happiness has punched this gap! I met a person I fell in love with. And he answered me in return. And HIV did not become an obstacle, for which I was most worried. We got married and soon I got pregnant. But in the fourth month, the doctors insisted on an abortion. It was a real tragedy. After all, we dreamed of a child. I so wanted to become a mother …
In 2010, a trust cabinet appeared at the Almaty AIDS Center. The specialists told in detail what HIV infection is, how it is transmitted, how to live with it, why special therapy is needed. Thanks to this information, I realized that a woman with HIV can give birth to a healthy child. And I decided – I will give birth! I started using antiretroviral therapy and in 2013 gave birth to healthy twins – boys, and in 2017 – another boy.
Of course, there were difficulties during pregnancy and childbirth. The twins were born prematurely, but thanks to the doctors, everyone is safe and sound!
I stopped being afraid of my status. I realized that I am the same person and have the right to life, motherhood, health, social benefits and, of course, happiness. Many women are still afraid of HIV and do not give birth. Many people with HIV give up. And so I created my own public organization. I want to help everyone in need.
Recently a young guy came to our organization. He is only 19 years old and has HIV. He was in a panic, in tears, did not know what to do. He was afraid most of all that his loved ones would not accept his illness. Relatives need to know that HIV is not a dangerous disease, it is not transmitted by household means. Support is needed, not rejection.
People need to see that there are people like them, but happy. And it is possible. They need an example. A lot of people come to us, in the organization, who need advice. We advise everyone to get tested for HIV and know their rights. And also to understand those who are near.
I often talk about myself, show photos of my children, do not hide my status. I believe in myself. I stepped over fear. And everyone can do it.

The stories of her recovery are surprised, their love stories...