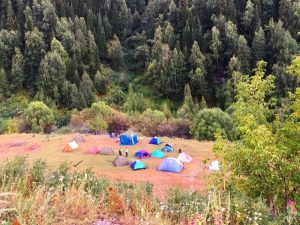 In August 2017, the sixth republican camp for people living with HIV was held in the Almaty region. For the sixth time, enthusiasts, like-minded people and friends gathered to replenish knowledge, improve skills and gain even more confidence in their abilities.

“The camp exceeded all my expectations. At first glance, this crazy idea is to take 31 people to the mountains, without communication with the outside world for several days. But it turned into a rallying of a very friendly and organized team! The strongest impressions I got on the team building exercises. I am very proud of myself and the guys who participated in the events. At such moments you begin to understand that we are strong, we can do everything and we are a real family! I am a person from the best community, I love every participant like a native, from any corner of Kazakhstan, ”says Vera (has been living with HIV for ten years) from Ust-Kamenogorsk.
The organization and holding of the summer camp became possible thanks to the joint efforts of the members of the organizing committee of “KazSoyuz PLHIV”, PF “AIDS Foundation East-West in Kazakhstan”, PA “Amelia”, PF “Answer”.
Mountains, tents, campfire songs, sports, romance … Great! But all this is the outer shell. And inside: hard study and a lot of work on oneself, at the end of which each mentally said: “I did it!”.
“I went for the first time. I don’t regret it a bit. The impressions from the camp are the brightest. I wanted to meet, communicate, learn as much as possible, test myself. The strongest impression is a meeting face to face with the same status as me, and even from all over Kazakhstan. There was a fear of the unknown. But the meeting scattered everything. The program was implemented 100 percent. Such a camp is needed – it is not even discussed. It brings people closer together, a team spirit is born, ”says Aina (has been living with HIV for nine years) from Astana.
The participants represented seven regions of the country: Almaty city, Almaty region, Astana city, Karaganda city, Temirtau city, Pavlodar city, Ust-Kamenogorsk city. All the participants passed the competitive selection, each went with his own questions, but there were the majority in common. Questions were addressed to coaches: Viktor Malchikov, Natalya Zholnerova, Natalya Rudokvas, Yagdar Turekhanov, Elena Rastokina. And these questions were different – about living with HIV and adherence to treatment, about self-motivation and self-acceptance, about sexual and reproductive health and the rights of PLHIV … And these questions were also controversial, often painful, but so necessary. Each received answer literally “lived”, reached the very heart, changed the worldview.
“I went to the republican camp for PLHIV for the first time. I wanted to replenish my knowledge and meet people. And also get positive emotions. What is happening there has exceeded all my expectations! In such a short time, we all became like family. It seemed to me that I have known many guys for a hundred years. The game of team building – to be on the other side of the fence through which the current passes, struck me with my own abilities. I didn’t think that I could jump over this imaginary fence, but realizing that you are in the team and bear some part of the responsibility for it, gave me the strength to jump over it without any fear, and twice! It was great because I didn’t expect this from myself! You can talk a lot about your impressions, because they are simply endless. Well, of course, I would like to see such camps more often and as many people as possible to attend them. It’s a special feeling to be in your community, ”says Irina (16 years old with HIV) from Pavlodar.
The experience gained next to friends and like-minded people is the most valuable, the lunch cooked on the fire is the tastiest, the rain that soaked the tent where your favorite songs are sung is the warmest, and the opinions are the most sincere.
⁠⁠ “This is not my first PLHIV camp. This time I went because I wanted to see old acquaintances with whom I once started working in the community. I wanted to have a rest, to hear what is happening in the world in the field of HIV. I expected joyful meetings. When we were leaving, I caught myself recollecting, when I was in the first camp of PLHIV. How many tears and emotions there were then. For a whole month she lived on memories. This time it was calmer, with feelings of gratitude and satisfaction, warmth and peace. I am very happy for the new guys, I understand their positive emotions, looking at them, I remember myself. The strongest impression for me is the trainings. I realized that I was underestimating my own capabilities. At one of the exercises, writing out all my grievances, I was so imbued that I wrote, and the tears themselves rolled down my cheeks, in my soul I so wanted to let go of all this, especially the burdens of past mistakes. I remember and I am confident that I can achieve more and that you need to believe in yourself, ”- Aida (11 years old) from Temirtau shares her impressions.
The camp took place. And there is confidence and desire that next year like-minded people will again be able to get together!