In Kazakhstan, patients in maintenance substitution therapy (RRT) defended their right to treatment 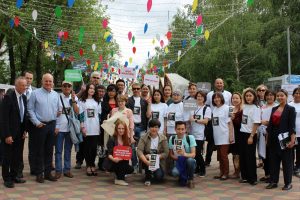 July, 2018. A republican action of the patients of the RRT program was held in Astana. They came literally for a few hours to the capital from other cities of the country – Almaty and Temirtau to talk about the importance of treatment and that therapy is their last chance to stay alive.

These people have similar fates. Drugs deprived them of their health, did not allow their dreams to come true. They did not work, they committed crimes, they were imprisoned. The closest people turned away from many. Almost all have been diagnosed with HIV infection.
To be in time for the next morning to take methadone in Almaty, Marzhan Zhunusova overcame her aerophobia and got on a plane for the first time in many years. The woman had been using drugs for a quarter of a century and no longer hoped for a change for the better.
– As soon as I found out about the substitution therapy program, I thought, what if this is the way out and helped me. Endless drugs, HIV positive – I thought my life was over. I am 45 years old and only now I have begun to truly live thanks to therapy, ”Marzhan tells reporters.
Ibragim Dolgiev, also from Almaty, had his first interview experience today. The man first tried drugs at 22 out of curiosity. These were the distant 70s of the last century. Then it seemed that the whole life was ahead and there would be enough strength to fight the addiction. But alas …
– For a year now I have been participating in a maintenance substitution therapy program and I realized that this is my salvation. My life has changed dramatically, for the first time in many years I can live without heroin, – Ibrahim admits.
They went to Astana Arbat together with members of communities of people living with HIV, people who use drugs (PWUD), men who have sex with men, representatives of non-governmental public organizations. In the hands of the slogans “Support, you cannot punish”, “Substitution therapy is my chance”, “A chance for a person is a solution for society”, in our hearts – the hope that the RST program will not only remain in the country, but will expand. In the meantime, there is something to worry about.
Since December 20 of last year, Kazakhstan has stopped accepting new patients into the RRT program. This decision, following the results of a government audit, caused concern among public figures and doctors, and panic among PWUD. At the end of June, a special commission was supposed to announce its verdict on the fate of PZT. The ALE “Kazakhstan Union of People Living with HIV” (KazSoyuzPLHV) together with RRT patients made an appeal to the President of Kazakhstan, Nursultan Nazarbayev, not to close the program and to give everyone an opportunity to participate in it. The document noted that supporting an effective national HIV response and making the OST program accessible to those in need will be critical to sustaining the results achieved by the Kazakhstan HIV Response Program and making progress towards the UNAIDS 90 goals. 90-90.
More than thirty letters were written to the Ombudsman in the Republic of Kazakhstan, a flash mob was held on social networks in support of PZT.
– While law enforcement agencies decide whether a program is “appropriate” or not, people are limited in access to treatment, at a time when this therapy is recognized all over the world as one of the most effective drug dependence treatment practices. The program must not only be preserved, it must be removed from the “pilot” status, and the possibility of access to it must be everywhere in Kazakhstan. RRT is a real prevention of HIV infection. One of the achievements is that four women, while in the program, gave birth to healthy children. And this is another argument that the program should live, – Oksana Ibragimova, the project coordinator of KazSoyuzLZhV, is convinced.
The protesters in Astana were supported by 64 international and non-governmental organizations from different countries of the world: Great Britain, Georgia, the Netherlands, Russia, the USA, Ukraine, France … In a number of countries, activists with posters about the protection of the PZT program went to the embassy of Kazakhstan.
Today the program continues in full. Patients receive methadone. Now in Kazakhstan in nine regions and in Almaty there are 13 substitution therapy points. Since the start of the program in 2008, the total number of patients has been 1,084. Currently, 322 patients are undergoing RRT, or 2.7% of those registered with opioid dependence. These people leave the criminal environment, find jobs, return to their families.

The action “Remember! We know! We will win! ” took place in Kazakhstan