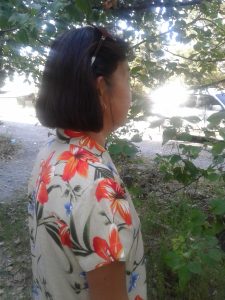 Family is the most important thing in the life of any woman. Husband and children is the meaning of life the closest people who give strength to live. Any obstacle can be overcome if you feel the support of family!

“When I was tested for HIV and was found to be positive I was 15 weeks pregnant. In addition, I had a little ten-year-daughter. Then it seemed life was over. What will happen to my children?”

August, 2016. Aliya (name changed) – a social worker from the public fund of the Kyrgyz Republic, has just returned from training on NGOs development, which was organized by the Central Asian Association of People Living with HIV. Training has enriched her knowledge and skills, provided an opportunity to meet interesting people, gave strength and inspiration to work on and of course, stirred up memories.

Alia grew up in a family with strict parenting. She worked as a midwife at the maternity ward of the local district hospital. In 2000 international organization have  conducted trainings for refugees from Tajikistan on reproductive health in her city. Aliya took an active part in them, and become peer educators. In 2009, he met on the phone with her future husband, who was in prison. A year later, she wrote an appeal to the court and since August, he was released from custody. They began to live together. Alia became pregnant and was very happy. Shewas 37 yearsold.

«When we were told that we had been diagnosed with HIV, I wanted to commit suicide. I was stopped by my daughter who needed me. Walking along the street it seemed that everyone was looking at me with conviction as if they know that I have HIV».

At that time, Aliya lacked knowledge and skills. Later, it came the understanding that the virus is forever and she must learn how to live with it. Aliya began to study law and regulations on harm reduction programs and later she began to work in programs to support people living with HIV and openly talk about HIV without fear and doubt.

Strong support was provided by the husband and children. Aliya met with successful people with HIV who have been actively engaged in public work. In particular, she was delighted by the National PLHIV forum, and performance on the Regional forum of Pf LHIV CIS.

Aliya realized that life with such a diagnosis does not end! As far as it will go, it depends only on her, on the mood and lifestyle. Although surviving with HIV in a small town is very difficult, Alia do not give up and finds the strength to live on. Her love,  good intentions and efforts embrace not only her family, but also all others who need it.

«Despite the fact that I have HIV, I am happy and I want to be even happier. Now I have a good family and favorite work. The oldest daughter is 18; she will soon start to study at university. Her choice to become a lawyer is not casual; she often became a witness to the stigma and discrimination against us. I am very proud that my husband and I brought a responsive daughter. Younger daughter will soon be six years old and she is our everyday joy, a breath of new strength. And husband is a reliable support. He works as a peer consultant. He is a successful man».

For the past six years, Aliya is on ART. In the four years of work in the field of HIV and harm reduction programs, a woman met many people who have become her friends and associates. She takes an active part in many meetings, workshops, trainings. Aliya helped many people to find faith in life. The work is an incentive to ensure that change, revise the values and take responsibility for your health and for the future of your loved ones.

«My family is my pride, my biggest victory over HIV. Our names that are given to us in heaven and probably largely determined our destiny I translated it as we the Stars of Happiness with hope and dreams!»

Love has no status

Development of the “Association country network of PLHIV” has allowed...

People living with HIV often lose everything in life because...