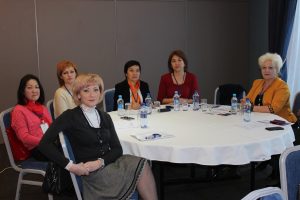 The history of the Country Network began in 2007. In that year, by people living with HIV, was founded community-based organization «Terra Sana». A little later, in the framework of a regional project, the employees of the organization and six PLHIV organizations from five regions of the Kyrgyz Republic decided to create the Association.  Further activities of the association covered not only the provision of direct services for the community representat5ives, but also in the segment of advocacy to improve access, quality of services and treatment of people living with HIV.

Today, the mission of the Association is to increase access to effective, safe, timely, quality care, promote greater involvement of people living with HIV in decision-making at regional and national levels on key aspects of the fight against HIV / AIDS and the elimination of its consequences at all levels as well as strengthening the capacity of members of the Association and other organizations of people living with HIV.

The first Association’s project was implemented with support of the Global Fund to Fight AIDS, Tuberculosis and Malaria in 2011 and allowed it to express themselves and focus on the development and support of organizations actively involved in the protection of the rights of PLHIV.

Today, as donors are leaving the country and the government needs to solve the problems associated with HIV alone, the Association aims to ensure that the state budget included funds for the treatment of people with HIV.

The Association is constantly taking measures related to PLHIV. There are among the most influential the National Forum of People Living with HIV, the informational campaign under the slogan: “HIV: There is medication but no time! Include in budget our right to life “,”Your health is in your hands!”, “Forever Life” as well as trainings, round tables, survey, community’s needs and priorities assessment, etc.

Through these activities the Association draws attention of the state and general population, as well as the PLHIV themselves, to the issues of access to diagnosis, treatment of HIV infection, the elimination of stigma and discrimination against HIV-positive people, support and strengthen the institutional and technical capacity of national organizations of Kyrgyzstan and the community as a whole and the development of partnership and cooperation mechanisms, and many other issues.

“We can and should be the main driving force, effectively engaging in the development and implementation of programs to combat the HIV epidemic, to influence the situation, drawing the attention of political leaders and the world community on the complexity of addressing the epidemic in our countries and offering solutions”, – says Yevgeniya Kalinichenko, the Head of the Association “Country Network of people living with HIV.”

Family is the most important thing in the life of...

People living with HIV often lose everything in life because...