Love has no status 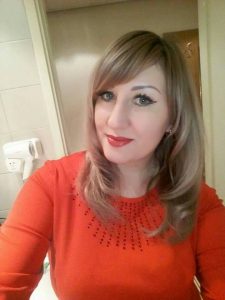 Discordant couples are a special cohort in the HIV topic. One partner is positive, the other negative. But between them is still a plus. Plus means love, family and children. Nice logical chain. What’s behind her? Can it be interrupted, or, on the contrary, can it grow with new, strong links?
In 2006, young Natasha Zholnerova graduated from the university and was proud of herself, because she was going to work as a psychologist. It didn’t take long to find a place. An active and creative girl was invited to a nongovernmental organization that provided assistance to people living with HIV, convicts, drug users and sex workers.
“I thought that all the people who come to us, to NGOs, are to blame for what happened to them. After all, no one forced anyone to use drugs or engage in unprotected sex. I was helping and empathizing, it seemed to me. But I didn’t take all these moments to heart and was sure that this would never happen to me and all this would bypass me. ”
Natasha started to conduct self-help groups for people living with HIV in 2007, and this was a turning point in her life. Different people, different destinies that pass by. And suddenly he is: handsome, smart, talented and self-confident! No, the smartest and most talented! It was impossible not to fall in love with him. But the status of an HIV-positive person was like a bolt of lightning. The girl was waiting for love, but the diagnosis was at first an obstacle. Natasha was agitated by dating, and suddenly there was a rage that there were such differences between them. In her mental rushes, the girl could not find answers that would help her make the right decision. And soon Natasha got married. For a beloved, beautiful and only person who has become the most dear in the world. And no status could become an obstacle. And mental throwing, they are characteristic of love.
“My husband is 8 years older than me, and for him I was a girl who needed to be taught, educated, protected and at the same time prepared for various difficulties of life. These difficulties began almost immediately after the wedding. I have faced discrimination because my husband is HIV positive. Many friends and relatives turned their backs on us. They literally “poked” me with a finger and called me “abnormal”, because I am from such a prosperous family, with a higher education, and I found myself not a prince whom I dreamed of, but a “reject of society”, as people said. I was hurt, hurt. My heart was torn to pieces from angry statements, but I was more offended for my husband, who faced fear, anxiety, anger, stigma almost every day. I often thought, here I am healthy and it hurts, but what about him? After all, I don’t know how he feels, how he accepted his diagnosis, how he experiences discrimination and rejection from society. ”
Three years of marriage passed, and Natasha began to think about the child. And again, there are many questions: how to get pregnant without risk to health, how to give birth to a healthy child, how to preserve family values ​​… During pregnancy, she repeatedly faced stigma and discrimination from the medical staff. It was painful to hear how the doctors whispered to each other that she was pregnant from a “Viceroy” man, to hold a medical card with a “discordant couple” sign in her hands, to feel awkward when they were carelessly taking tests … But all this made Natasha stronger and more humane towards others people.
“Meeting people living with HIV in a self-help group no longer seemed like professional development to me, because I myself learned a lot from them. We shared our experience, supported each other. And I really began to understand and love people, everyone, regardless of HIV status, social status, behavior, habits or other moments that, unfortunately, alienate many. All my clients became not just friends to me, they are still the closest people to me. I appreciate every person! We are all so different, we have different habits, outlook on life, but we are unique and special. ”
Natasha’s dream came true. She gave birth to a healthy, long-awaited and the most beautiful daughter Amelia, and she herself remained healthy. When she saw her for the first time, happiness knew no bounds. This was extraordinary happiness and peace. Natasha is grateful to her husband for the fact that he appeared in her life at the very moment when pride and self-confidence exceeded other human qualities. The girl is sincerely grateful to all people who broke stereotypes and taught them to treat all people equally, not to divide into good and bad, to appreciate everyone.
And some time later, Natasha created her own non-governmental organization – NGO “Amelia”. In it, she rallied many civic activists to work together on HIV prevention and harm reduction. Under Natasha’s leadership, the organization has won several grants from well-known international organizations (including EHRN) and successfully implemented them. Today Natasha Zholnerova is well known in the regional Akimat, in the drug treatment center, in the police, and in schools … Everything concerns her. Especially people who need help.
… Time has passed. The husband died, but the warmest memories of the experience gained and the wisdom nurtured over the years remained.