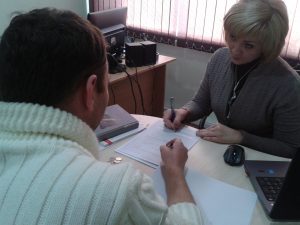 People living with HIV often lose everything in life because of drug use: family, work, health, friends … unfortunately, not everyone able to get it all back. Alex from the Kyrgyz Republic has found his way, which helped him to find peace and place in life. Eventually he became a volunteer.

«Through volunteer work I have gained friends among the staff of non-governmental organizations, doctors, who support and understand me, they do care about my life and my future».

On his HIV diagnosis, Alex learned in 2012. In Bishkek AIDS Center, he met the same guys who brought him into the organization working with HIV positive people. Then Alex came to the supportgroup, where he became a permanent member. This group of young people gained a lot of friends and began to empathize with every problem other people living with HIV.

Long-term drug use led him to the fact that Alex was left with nothing: no family, friends, work, and what is most importantly he become “tired” of life. Seeing the desire to live in the other guys from the number of PLHIV, he believed that he can change his life for the better. Then the thought flashed in is head – “you can not do it and it’s not for you.” Nevertheless, Alex found the strength and said NO to all of this: NO to drugs, NO to moral slavery. Guys from non-governmental organization saw his desire to help the same as he is, and offered him to become a volunteer. He happily agreed. Since this his life began to change around. Alex began to read more literature, to participate in actions in the events dedicated to HIV and AIDS. Life became more interesting, filled with new reliable friends.

Together with the people working in the Association of Country Network of PLHIV, Alex started to take part in trainings on capacity building, in research on monitoring and accessibility of services for people living with HIV. Training on Human Rights, organized by the Central Asian Association of People Living with HIV, significantly increased his legal literacy and today, Alex himself can write applications and knows where to go for help.

Worrying about the situation with ARVs in the country, volunteer actively joins held promos related to this problem solution. For example, he participated in the preparation of the action “Take into consideration whiting the budgeted our right for life”, which was organized by the Association of Country Network of people living with HIV. During the event, participants created a floral arrangement in the form of a ribbon symbolizing the fight against AIDS.

Alex admits: “Ever since I live a full life and enjoy it!”.

Today, another of his drams come true, Alex has found a job, he is engaged in horticulture, but continues to participate as a volunteer in programs for HIV prevention and treatment.

Development of the “Association country network of PLHIV” has allowed...

Family is the most important thing in the life of...