By helping others you help yourself 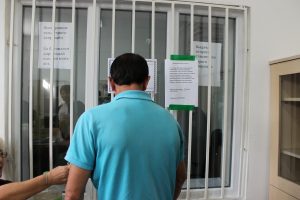 Through self-stigma, pass every person living with HIV. Stopping oppressing yourself, needs a lot of mental strength, but also it requires help of peer counselors, psychologists, specialists and friends. When you have experienced self-stigma yourself, it is easier to help others. In addition, if you are still a doctor, you are able to provide expert assistance to many.

«For me, the HIV is a challenge. I began to appreciate the time I understand that I have it less than others do, so I do not want to waste it on playing computer games on gambling. I am not interested in it anymore. I got a lot to do».

On Oct. 30, 2015 in Almaty was held the V Congress of the Kazakhstan Association of People Living with HIV. Forty delegates representing non-governmental organizations of the Republic of Kazakhstan from six regions attended the congress. The event aims at defining further activities of the Association in the transition from the donor to the national financing. During the congress, delegates discussed a variety of issues, including: the involvement of NGOs in the development and implementation of local programs on HIV and AIDS through the mechanism of the state social order, the effectiveness of advocacy campaigns in the regions, monitoring and evaluation of programs on HIV and AIDS. Particular attention was paid to ensure the quality of antiretroviral drugs to reduce stigma and discrimination against people living with HIV and in self. One of the delegates of the Congress was a young doctor Yerzhan. His speeches, comments and statements about self-stigma caused an active response. The young man himself had experienced this feeling in full.

«I knew about my HIV+ status when I was 18 years. It was a great tragedy. Since I did not resort to any form of blood transfusions, operations, never drank, did not smoke, did not use drugs and had no sexual practice. The only thing I could think of was a medical procedure … After several years of everyday spills tears and blame myself, I am tired. Tired of such a lifestyle. Moreover, I realized that if I do not change something, I’ll die. In addition, I fell of CD-4 cells».

All the emotional stages of a deep shock to the inner anger and finally acceptance of himself with the disease that came forever, Yerzhan survived. Then suddenly matured. Today he is 25 years old. Recently, he was able to open the closest, first his girlfriend, from which over the years of isolation he broke away, and then to his best friend. Eventually a relationship that is now leading to the wedding, as well as the friendship turned out to be real and strong.

A very important role in overcoming the crisis played an appeal to the non-governmental organization. It supported and invited him to work. Yerzhan has started to help others to overcome self-stigmatization, believe in yourself. He is now, after a few trainings for trainers organized by CAAPLHIV, actively protects the rights of people living with HIV. He is sure that by helping others he helps himself. Yerzhan is the participant of the international project, which educates future activists. He passed the competition to get there and he has already visited a number of European countries. All the knowledge that the young man receives, he shares with self-help group, that support PLHIV and explains how to live, take medicines, what are the side effects, co-infections, and so on. Medical education and experience of dialogue enabled him to provide counseling.

«When you become a peer counselor, you take responsibility for another person. The first time a person comes in, but does not open to you. Sometimes we have to work on it more than a month. I even had a patient with whom I worked for over a year, such a strong Self-stigmatization she had. It depends on the personal stress of every person. When you work with people you yourself become to take it easier».

For HIV-positive people to disclose their status is a natural desire as long as in a society there is a strong discriminatory attitudes towards them. In recent years, more and more people talk openly about their illness, but unfortunately only a minority express support for PLHIV. There is no such a stigma, for example, against cancer or diabetes. However, Self-stigmatization is often even more than the stigma from the outside. Self-stigmatization experienced every person with HIV, many people live with this all the time. Experience has shown that personal examples of people with HIV who have a medical degree, successful in dealing with self-stigmatization of NGOs’ customers. Their experience in many cases requires the study and dissemination.