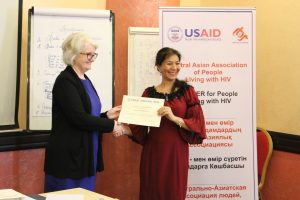 Protection of human rights remains today one of the leading problems for people living with HIV in Central Asian countries. Their rights are still violated.

“People living with HIV learn their status often do not know where to look for protection of their rights. In such situations, they are discouraged. Many people do not know their rights, afraid to express them and to protect”

In Kyrgyzstan,AIDS centers do not have regulated clinical protocols and drugs for the relief of conditions opportunistic infections or side effects of ARV. Violations of the rights of people living with HIV, stigma and discrimination lead to psychological diseases, problems in families of HIV-positive people, and even to suicide.

Parvina Akhmedova was born and raised in Tajikistan. In 2005, she learned of her HIV-positive status. The woman is still grateful family that understood and supported her. However, on her work situation was diametrically opposite. The employer is contrary to law, ordered all employees to take the test for HIV through private clinic. Parvina’s result of the test was known to all. The woman was forced to resign. It was difficult decision providing the facts: the country’s unemployment, high prices for essential goods, little child. Somehow, I had to survive.  Parvina had to work at the hard work, the diploma proved useless. Soon she met other women who also lost their jobs because of the status and did not know how to survive. In 2010, Parvina has organized an initiative group, and a year later – a non-governmental public organization “Bovary”. One of the goals of its activities – the protection of the rights of women living with HIV. Parvina and her friends are introduced to the rights, together with professional lawyers to help defend them in crisis situations.

“As a rule, women do not know the key documents related to the rights of people living with HIV. They think that they have no right to work, for example, in medical institutions, to teach children. Often the stigma itself does not allow to realize their rights in full. ”

Lack of knowledge  people living with HIV make up by a variety of educational activities, which including organized by “Central Asian Association of People Living with HIV”. For example, last year the community leaders of Kazakhstan, Kyrgyzstan and Tajikistan met in the camp at Lake Issyk-Kul, which improves their knowledge and enhance their community work.

To get to the training of trainers Parvina, like other candidates, has passed the competitive selection, which takes into account the experience of training and motivation. The competition was attended by representatives of non-governmental organizations, members of communities of people living with HIV in Kazakhstan, Kyrgyzstan and Tajikistan: 4 people from each country.

Within three days the participants under the guidance of master trainer from Ukraine Svetlana Belay improved knowledge in legislation to protect the rights of people living with HIV, studied best practices, and improved practical skills of conduction of the training, including methods and tools. Participants learned how to make the program, to conduct role-playing games, moderated the discussion. All of this is a prerequisite for them to conduct cascade training to protect the rights of PLHIV in their countries. Trainings are planned later this year.

After training for trainers Parvina Akhmedova already preparing her training, which will be hold in Dushanbe for women with HIV. Future participants expect their trainer to answer many questions that will help them to gain confidence and stand up for their right to get  a desired job, good health care and, of course, the opportunity to obtain the happiness of motherhood.

“Training on the protection of the rights of PLHIV can provide positive impact on the strengthening of the legal capacity of AIDS-service organizations in the region, reduce stigma and discrimination, increase access to treatment of people living with HIV and take active participation in public life, as well as strengthening the leadership capacity”, – said President of the Central Asian Associations of people living with HIV Nurali Amanzholov.

Effective dialogue between NGOs, government and pharmaceutical companies need to improves the treatment of people living with HIV

Not everyone dares to talk about his HIV-positive status publicly...

To increase tolerant attitude towards people living with HIV in...

“Capacity of AIDS service NGOs of Central Asia in the...