Effective dialogue between NGOs, government and pharmaceutical companies need to improves the treatment of people living with HIV 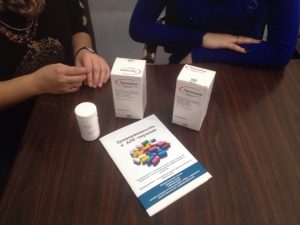 Kazakhstan has created a platform for dialogue with the participation of non-governmental AIDS service organizations, government agencies and pharmaceutical companies to improve access for people living with HIV to ARVs.

“Open dialogue non-governmental sector, government and business will expand and improve the range of antiretroviral drugs imported into the country, to simplify registration and reduce prices.”

December 2014. The only way to prevent AIDS by maintaining the health of HIV-positive people are anti-retroviral (ARV) drugs. Thanks to antiretroviral therapy  people living with HIV (PLHIV) reduced the viral load, the disease stops progressing. Nevertheless, today the market ARVs in Kazakhstan is not very diverse. Meanwhile, the demand for them grows. Moreover just in Almaty 33% of HIV-positive (838 people), including 38 children receiving ARVs.

“First I was afraid to take ARVs – says Aliya Z.- the doctor convinced that it would be good. After a few months I have felt improvement in health, disappeared weakness, frequent headaches. ARV I’ve taken therapy  7th year”

During this time, Aliya Z. got a job, began to work as a volunteer in an NGO to help people. The woman had a hope and aspiration for the better. So she believes that ARV treatment is life-saving.

In a recent study among the most topical problems of people living with HIV, along with breach of confidentiality by medical workers, there is a lack of ARVs, lack of access to rapid diagnostic tests to determine the CD-4 cells, which leads to frequent changes in treatment regimens, failure hospitalization. In addition, foreign citizens in the country do not have access to ARV therapy.

This study was conducted under the Project Public Foundation “The Council of Representatives PLHIV community of Kazakhstan.” The organization was founded in 2014, its activities are supported byALE “Central Asian Association of People Living with HIV” in the frame of USAID Project “Leader for people living with HIV.” One of the priority objectives of the Public Foundation is to provide a platform for dialogue between the government, pharmaceutical companies and patients on HIV and AIDS, tuberculosis and hepatitis.

Social Fund activists met with representatives of the world’s known pharmaceutical companies that produce ARVs. Manufacturers are ready to expand its products on the basis of WHO protocols, deliver them to Kazakhstan, thereby increasing access for people living with HIV to the best global brands.

In December 2014 at the initiative of the Public Foundation “The Council of Representatives PLWH community of Kazakhstan” in Almaty hosted a roundtable discussion on the problems of stigma and discrimination against people living with HIV with international, state and public organizations.

Roundtable participants discussed the basic rights and freedoms of PLHIV, guaranteed by the state, including the right to free health care and the supply of drugs.

However, there are still a number of problems for PLHIV, to which you should pay attention to government agencies and civil society; including questions of human rights, providing access to existing procedural, institutional and other monitoring mechanisms to ensure PLHIV rights. It is needed to consider also issues of prevention of discriminatory practices and reinstatement of rights.

During the Roundtable the CAB presented the most common problems of PLHIV:

– Breach of confidentiality by health professionals,

– Delay in initiation of treatment due to lack of access to diagnostic tests to determine the CD4 cells and deficiency of antiretroviral drugs, which leads to frequent changes in treatment regimens,

– Lack of access of foreign nationals living in Kazakhstan to health care, including antiretroviral therapy,

As a result of the Roundtable participants prepared a number of recommendations public authorities in relation to solving problems of PLHIV, including:

– Extend the assortment of antiretrovirals registered in the Republic of Kazakhstan;

– Monitor on issues relating to stigma and discrimination .

– Provide service coverage of timely diagnosis to determine the level of CD4 and treatment of people living with HIV and HIV / TB co-infection.

– Ensure the participation of PLHIV communities in policy making process.