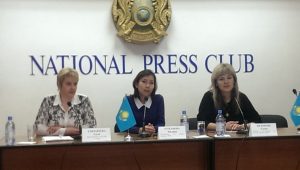 For the first time in the history of the National Commission for Women Affairs, Family and Demographic Policy under the President of the Republic of Kazakhstan in the composition of its working group of activists entered the “Central Asian Association of People Living with HIV”  President – Nurali Amanzholov and the member of Kazakhstan Network of Women Living with HIV  – Indira Otzhanova.

“Most women who have experienced of Shymkent tragedy has not yet come to themselves, they are still depressed and still cannot come to terms with their status. Very often they feel discriminated against by men, loved ones, officials and doctors”- says Indira Otzhanova.

Her son Dastan, who was not a year old, were infected with HIV at a hospital in Shymkent, where he was treated for bronchitis. Infections transmitted to Indira when she fed the baby. Then it was a tragedy.

Indira has frankly told about the diagnosis to her husband and family. They have reacted in different ways. Before their house, relatives often came with their children, but soon these visits ceased. It does not become an understanding with her husband.

“I was hurt so much, but I endured because I did not want to lose my family. Just quietly suffered, I had no one to talk, to express myself. My husband began to spend more time with friends, often spent the night out of home. I was looking for the cause in myself: because I am an HIV-positive, and he is healthy. ”

Indira and her son left the family. The young woman had to begin to live again. At first it was hard: she wandered for a rented apartment, sometimes not enough money even for bread, little son was sick, but Indira did not give up. She found a job, met a kind, open people. Among them were the same women with HIV who have had to leave or be expelled from their families. Indira increasingly had to communicate with the parents of children who are just like her son infected with HIV. Indira decided to create their own NGOs and called him “Zhan -Zholdas.”

Gradually was adjusted personal life, Indira met a loved one, who, by the way, is HIV-negative. Recently, a woman opened her studio for individual tailoring for women. Now her dream is to bring onto the world or to adopt another child. Still Indira works to protect women from HIV-related stigma and discrimination.

“Before this case, I was obedient kelin (“wife” on Kazakh language translator) that pours tea and does not go beyond the threshold of her house. Now I can morally and financially support my child and myself. I can help someone who is in trouble, with open-face to talk about the problems of women living with HIV. Next to me more and more like-minded people. We are united and we protect each other.  There is no discrimination in our lives! ”

Today the working group of the National Commission for Women Affairs, Family and Demographic Policy under the President of Kazakhstan has prepared a draft plan of action to implement the Convention on the Elimination of All Forms of Discrimination against Women, which will be carried out with the direct involvement of central government bodies. This document, which also reflects proposals of leading NGOs and experts from the c