I have learned how to live with HIV, and I want to help other PLWH 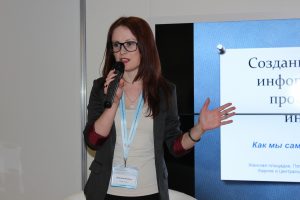 Sometimes women are called weak. Especially women with HIV. More examples of when they talk about HIV with an open face, bravely fighting for their rights, give birth to children against the advice of “well-wishers” and solve the most important problems of the state, along with ministers and deputies.

“The Central Asian region is now growing pace of the epidemic among women of reproductive age; it comes amid ongoing stigma and discrimination. Voice of Women for a tolerant attitude today is very important”.

Moscow, March 23, 2016 – The Fifth International Eastern Europe and Central Asia AIDS Conference (EECAAC-2016) organized jointly by Rospotrebnadzor and the Joint United Nations Programme on HIV/AIDS (UNAIDS). EECAAC-2016 is the region’s largest event on the topic of HIV prevention and treatment. The conference brought together nearly 2500 delegates from 79 countries. Among them – world’s leading scientists, activists, politicians and civil society leaders.

Women’s platform for dialogue has played an important role in the discussion of pressing issues. It raises important issues relating to the care and support for women living with HIV. Women spoke clearly, convincingly, supporting each other. Women leaders themselves have passed a hard way of life, HIV has made them stronger. One of these women is Lyubov Chubukova from Kazakhstan.

Luba’s story is similar to the stories of many women with HIV. She was born and raised in Pavlodar city, in a large family. She was a good student in school, engaged in social work, helping the younger brothers and sisters doing homework. First love, like a fairy tale come in 18 years. She was infinitely happy. Then all of a sudden, life made an unexpected and dramatic turn.

We did not know that he was HIV positive. I was in love and I was making plans for the future. I wanted to have children and travel a lot. Now, 10 years later, I recall how depressed I was when I found out my HIV status. It sounded really like a death sentence. I was going to live for 3 years, and no kids! However, apparently, the destiny of all decided otherwise. I graduated from college. I travel a lot. I growing up a healthy daughter, she is my pride. I am happy and love my job. Today, I for 8 years I have receive supportive therapy, which allows me to live a full life.

Fulfilling life, it is not only the family, and lovely daughter. It is also a professional self-realization. Luba for few years has been working as a peer counselors, social workers, M&E specialist, project manager in the public non-governmental organization, “Ty ne odin / You are not alone”. In addition, she actively took part in the work of the Kazakhstan network of women living with HIV and the CCM. Regularly taking part in trainings, seminars, business meetings and conferences in Kazakhstan and Central Asia. This has helped not only in professional and personal formation, but also played an important role in the victory over self-stigma.

Positive experience was received trough getting observation of the doctor from outpatient clinic (outside of AIDS Centre), which are often adequately calmly perceived my diagnosis, and it does not compromise the quality of services provided to me. The same applies to other social contacts. My environment, distant from this problem, and learn that I have HIV, and it has no effect on our future communication.

I ceased to be a victim. That was saddened me and did not allow me to grow. Knowing your rights and faith in people is also good support in the fight against the self -stigma. We can not turn back the time, we have to go ahead, pushing the boundaries and do not limit ourselves (my experience shows that we can create a lot of limits and constrain ourselves with self-stigma). The main thing is to overcome fear and begin to live!

Today Lyubov is working as specialist on gender in the CAAPLHIV. She continues to solve the most important problems of women with HIV but at regional level. At the Moscow conference went to do the same but in a larger scale. She presented a report on “Gender analysis of national HIV and AIDS policies in Kazakhstan and Tajikistan”, took part in the workshop “Women who use drugs. Access to services in the EECA region”, actively participated in the open dialog platform of UNAIDS. She was talking openly, sincerely, on behalf of the many women. She learned how to live with HIV, and now actively helping others find inner freedom and believe in themselves.