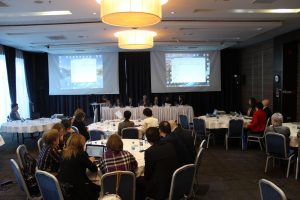 “Stigma and discrimination against people living with HIV today does not only violate the fundamental principles of human rights, but also they are factors in the spread of HIV infection. They are the main barriers to access to HIV prevention, treatment, care and support in the field of HIV, as well as any medical, social, legal and other services. Eliminating effects of stigma and discrimination is a key objective of the strategy “towards the goal of Zero”.

February 2016. Organized by USAID and CAAPLHIV the “Regional meeting to present the results of the “Stigma Index” survey in the Central Asian region” conducted with participation of the USAID the “LEADER for people living with HIV” project was hosted Almaty.

The next stage were “Stigma Index” consultative meetings. At the meeting, which took place in all three countries, were invited key stakeholders and decision-makers from government agencies (including national, regional and city AIDS centers), civil society and the international community. Participants discussed goals, especially applications of the “Stigma Index” results.

“The main consequences of stigma in health care settings are barriers to HIV diagnosis and prevention services, treatment and care, the double stigma in relation to PWID, MSM, SW and migrants. There is a violation of human rights: mandatory HIV testing, lack of privacy, denial of medical care”.

Maria Boltaeva, UNAIDS Director of the Office in Tajikistan.

“In Tajikistan, there is a need to work in local communities (especially in rural areas) to raise awareness about HIV. A separate topic of Kyrgyzstan PLWHs support should be a correction of internal manifestations of stigma and self-discrimination (especially self-limiting of access to health services), taking into account gender and cultural sensitivity. In Kazakhstan, the group under the special attention is a PLWH 30 years of age or older, which is characterized by the most severe manifestations of internalized stigma”.

The regional meeting in Almaty was attended by representatives of state, international and public organizations, including the Ministry of Health, National AIDS Center of Kazakhstan, Kyrgyzstan and Tajikistan, USAID, UNAIDS, UN-Women, as well as experts of the All-Ukrainian Network of PLWH.

At the regional meeting, each country delegation developed a strategic plan and determined priorities for the fight against stigma and discrimination, which will ultimately support the efforts to protect the rights and interests of people living with HIV.